Luxembourg gains independence in 1839, and initially functions without parliamentary representation. After the introduction of a first assembly in 1841, the parliamentary institution sees its role evolve. 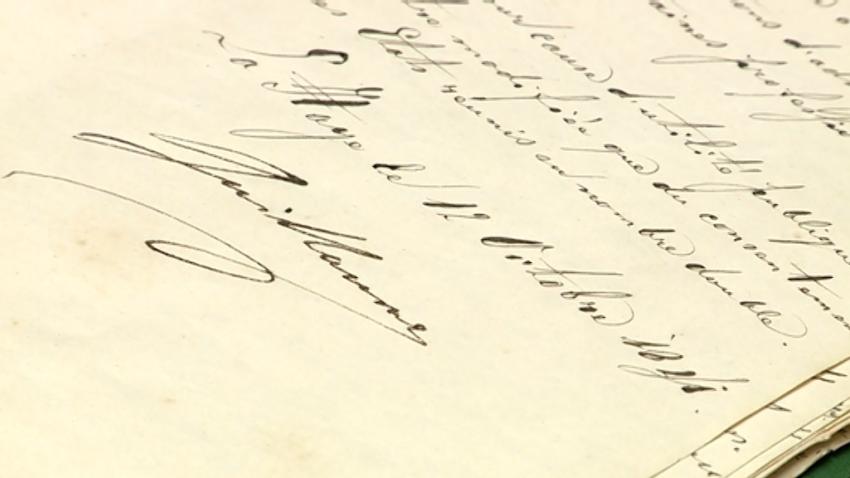 The parliamentary assembly, under a regime of absolute monarchy

With the Constitution of 1841, an ‘assemblée des États’ (Assembly of States), made up of 34 deputies, is established. Under the absolute monarchy in place at the time, its powers are extremely limited: it cannot take decisions and plays a purely consultative role alongside the sovereign. The parliament’s approval is required in very few areas, including tax legislation. Only Grand Duke Guillaume I has the right to propose laws. Parliament only meets for fifteen days a year, and its sessions are held in secret. 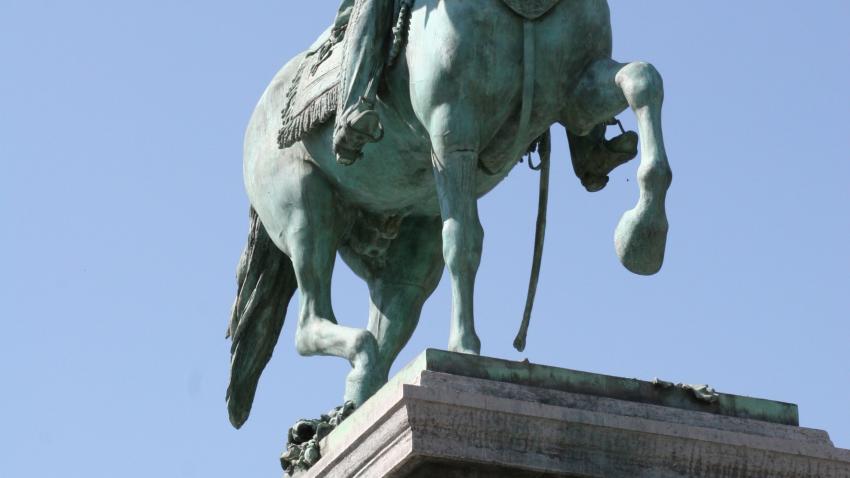 The beginnings of the separation of powers

In a climate marked by revolutionary democratic and social movements in France, a new Constitution is created in 1848. It introduces a constitutional monarchy: the King Grand Duke now only has the powers conferred upon him by the Constitution and the special laws.

The legislative power rests with the parliament: it has the right to propose and modify laws. It now decides on the ordinary and extraordinary budget and obtains the power of inquiry. The government becomes accountable and is quickly subject to the scrutiny of the Chamber. The sessions of the parliament, now called the ‘Chambre des Députés’ (Chamber of Deputies), are made public. 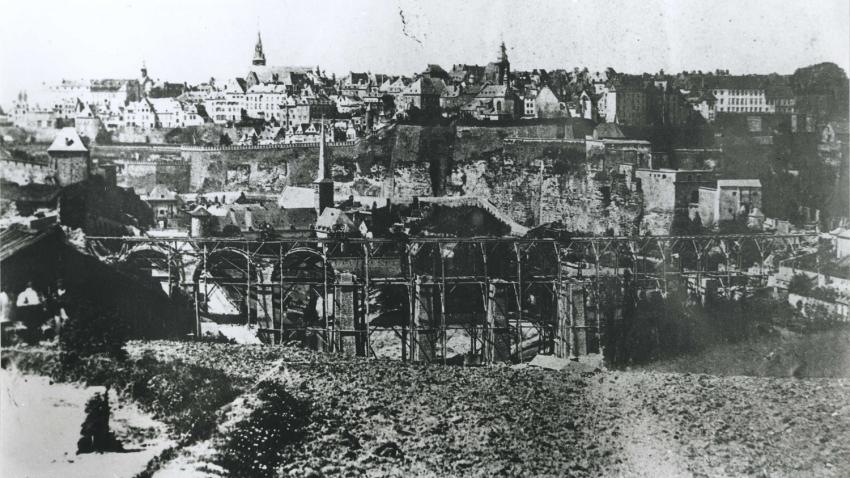 In 1853, King Grand-Duke Guillaume III (William III) calls upon the government to draft a new Constitution limiting the Chamber’s powers. When the latter refuses to deal with the government’s proposed review, the Grand Duke dissolves the government. The result is a brief return to absolute monarchy. The parliament, which is once again known as the ‘Assembly of States’, retains its legislative powers, but the King Grand Duke is no longer obliged to approve and promulgate laws within a specific time limit. Taxes no longer have to be voted on every year and the permanent budget is reintroduced. The Conseil d’État (Council of State) is created in 1856 to monitor the parliament. It is given the task of issuing opinions on government bills and draft regulations and dealing with administrative disputes. 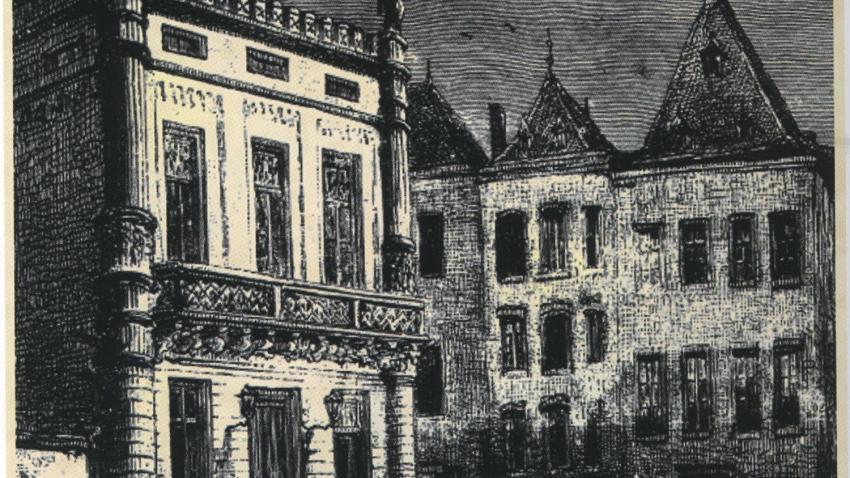 Following the declaration of neutrality and independence of Luxembourg in 1868, the Constitution is revised in order to propose a compromise between the freedoms of 1848 and the authoritarian Charter of 1856. The parliament is rechristened Chamber of Deputies and recovers most of the rights lost in 1856, such as the annual vote on the budget and taxes. However, the King Grand Duke retains extensive powers: he exercises the executive power and is still the co-holder of the legislative power. 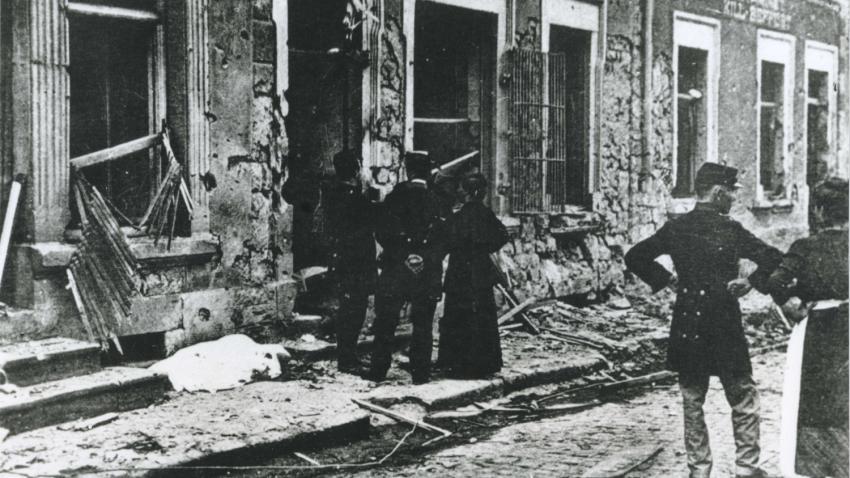 The introduction of universal suffrage

The constitutional review of 1919 introduces universal suffrage and enshrines the principle of national sovereignty. Progress on the path towards democracy takes place in a period of crisis for the monarchy with famine and supply difficulties.
The Grand Duke remains the head of State and co-legislator. An anti-monarchist movement does not have much influence: in the 1919 referendum, 80 % of voters want to maintain the dynasty. 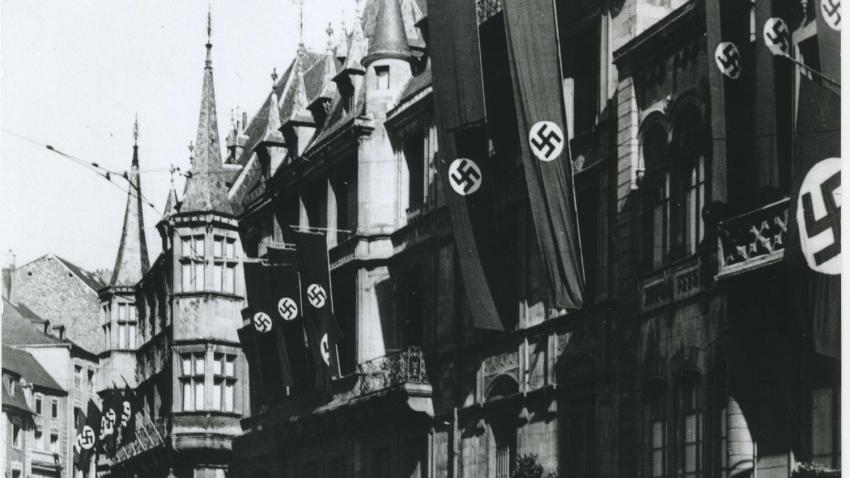 During the Second World War, the exercise of legislative power is suspended, and the Chamber is dissolved. The government and the Grand Duchess go into exile.

The first post-war session opens on 6 December 1944 and is limited to a single public session, as there is not yet a sufficient number of deputies. A consultative assembly meets from March to August 1945 and new elections take place in October 1945. The post-war Chamber carries out a new review of the Constitution, through which the country’s neutral status is repealed.

1965
The introduction of standing committees

The implementation of special and standing parliamentary committees will facilitate the work of the Chamber. The organisation of the Chamber into sections, which are not specialised and with members chosen by lot, did not enable quality work. Another innovation concerns the political groups: they are officially recognised in the Rules of Procedure and obtain premises as well as subsidies calculated on the basis of their proportional representation. These material means are much less substantial than those allocated in 1990 and they only go to political groups.

1979
The first elections at the European Parliament

These elections are organised in parallel with the national legislative elections and lead to a tentative start of a political debate on Europe. Luxembourg maintains six deputies in a European parliamentary precinct which now has 412 deputies: three from the CSV, two from the DP and one from the LSAP. These six deputies are still members of the Chamber of Deputies. Thanks to the elections, the European parliamentary assembly now has a democratic legitimacy and warrants the name of ‘European Parliament’ which it gave itself in 1962 and which would only be made official with the entry into force of the Single Act in 1987. Already in 1979, the European Parliament took full advantage of its budgetary powers by refusing the budget for 1980.

1990
The funding of political groups

Changes to the Chamber’s Rules of Procedure, carried out in 1990 and 1991, substantially increase the material resources made available to political groups and help to professionalise political work. In addition, each deputy is entitled to a fully equipped office close to the Chamber building. The Chamber covers the costs incurred by the deputies in order to hire staff. Material assistance is not only increased but now also extended to technical groups, following protests from the smaller parties when parliament reopened in 1989. 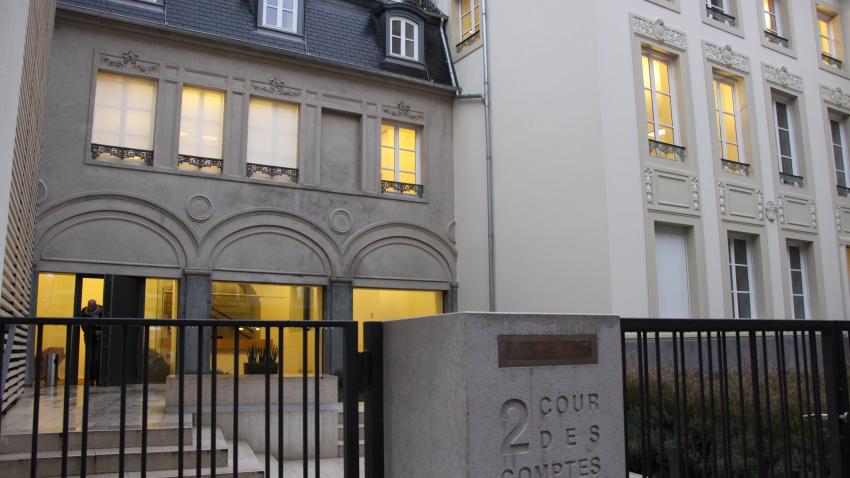 The Court of Auditors is an independent body whose services may be requested by the Chamber of Deputies. It monitors the financial management of the State’s bodies, administrations and services and may also monitor the financial management of all legal persons under public or private law and natural persons under private law that benefit from public funding (e.g. the Musée Dräi Eechelen or the European NAvigator). Each year, the Court of Auditors drafts a general report on the State’s general accounts. It may, at the Chamber’s request, issue opinions on government bills or private member’s bills with a significant financial impact on the public treasury. 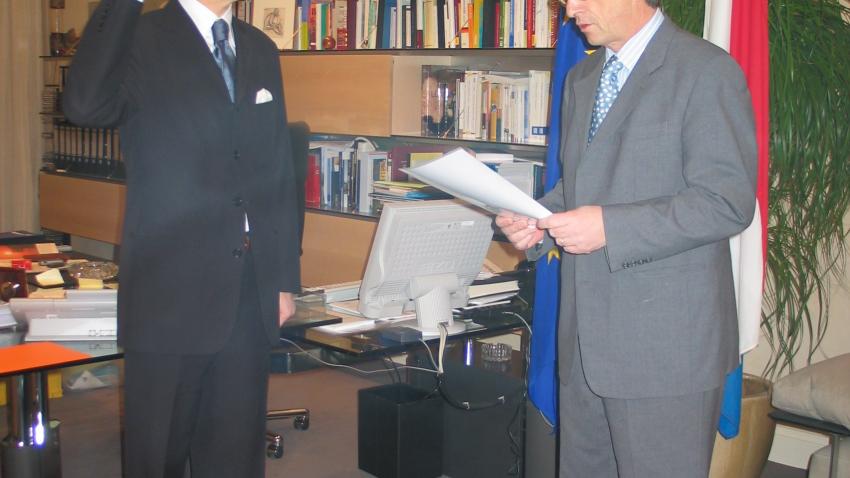 Introduction of the Ombudsman

In 2003, a new law establishes the role of mediator and Ombudsman. The latter is attached to the Chamber but when performing their duties, may not receive instructions from any authority. The Ombudsman deals with citizens’ complaints against the state administration or municipal administration and the public institutions falling under the authority of the State or the municipalities. They try to resolve disputes between the two parties by serving as an Ombudsman, and also act as an adviser. Each year, the Ombudsman presents their report to the Chamber of Deputies, which organises its publication. 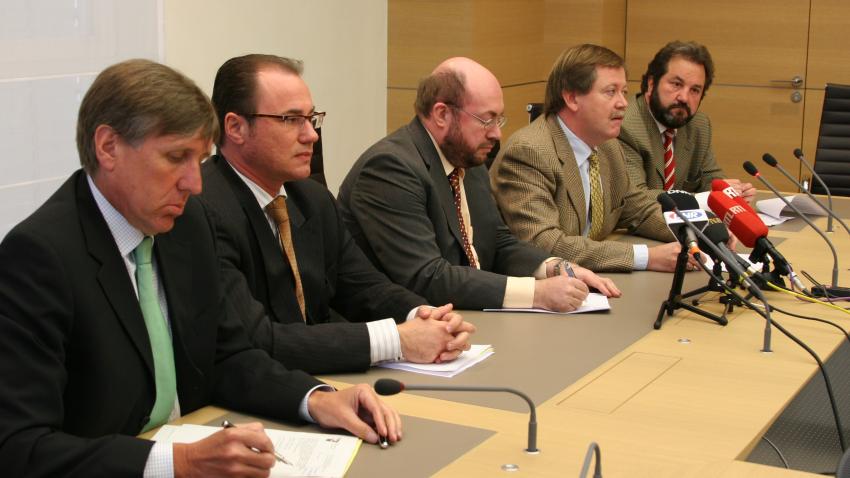 The funding of political parties

The political parties are directly funded by the State as of January 2008, after being written into the Constitution, and after the vote on the funding act of December 2007. Their accounting is strictly separated from that of the political groups: there are now two different entities, each with its own staff. In order to benefit from public funding, a party must prove that it has a regular political activity, it must present full lists of candidates for the legislative elections and must have obtained at least 2 % of the vote in these elections.

The public petition is a new instrument that goes further than the ordinary petition. After being declared admissible by the Committee on Petitions, the public petition is published on petitions.lu. If the petition manages to collect more than 4,500 signatures – on paper or on a specific form –, within a six-week period, it will then give rise to a public debate broadcast by ChamberTV. 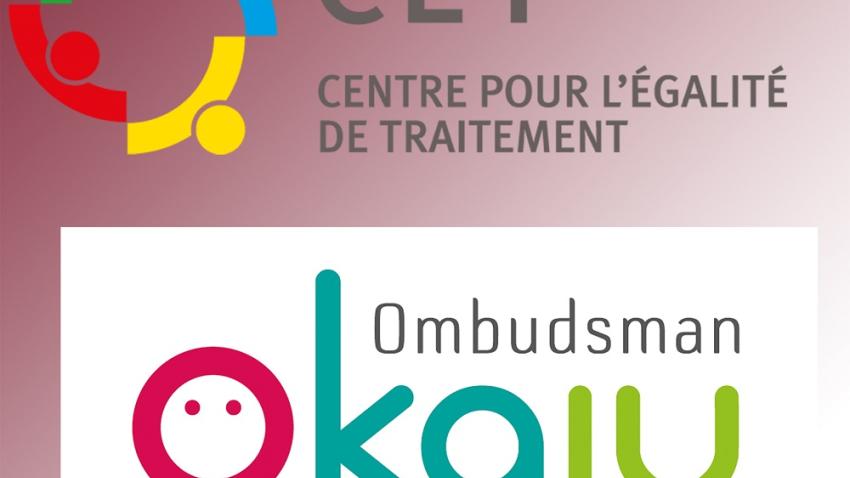 The OKAJU and the Centre pour l’égalité de traitement (Centre for Equal Treatment) attached to the Chamber.

The OKAJU, Ombudsman fir Kanner a Jugendlecher (Ombudsman for Children and Young people) takes over from the ORK, Ombuds-Comité fir d’Rechter vum Kand (Ombuds-Committee for the Rights of the Child). In order to ensure their independence from the executive power, the OKAJU no longer depends on the Ministry of Education, but is attached to the Chamber of Deputies and has its own administration.

This ensures that they do not receive instructions from any authorities in the context of their duties.

In the same year, in 2017, the Centre pour l’égalité de traitement - CET (Centre for Equal Treatment) is also attached to the Chamber. It was founded in 2006 and until 2017 it was under the supervision of the Ministry of the Family. 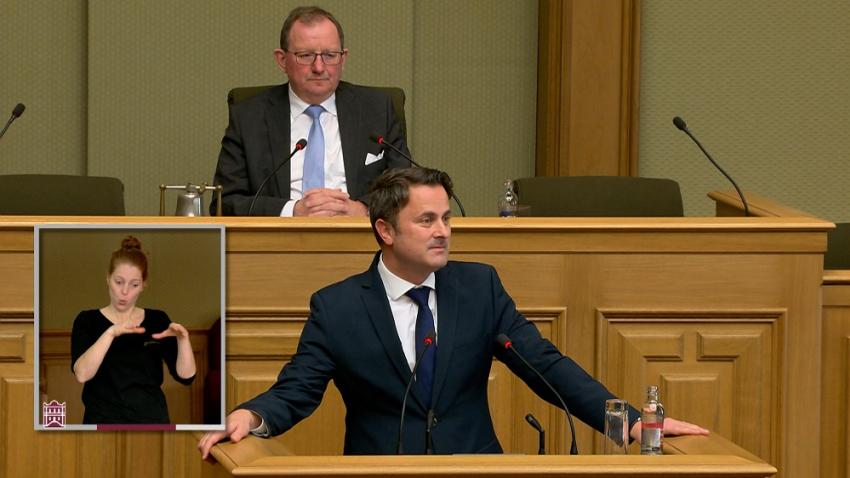 During a state of emergency – an international crisis, genuine threats to the vital interests of the population or to public security –, the Grand Duke may take measures derogating from existing laws. The use of this procedure is justified by the impossibility for the Chamber to legislate in a timely manner. The emergency measures must be necessary, adequate, and proportionate.